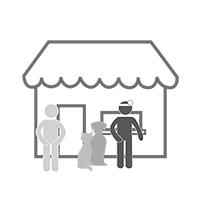 In home care means local vets make house calls and can take the time they need to focus solely on your pets needs and wellbeing in a comfortable environment. No more stressful trips to the clinic. 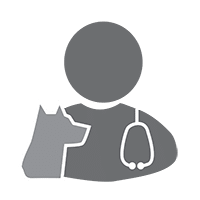 With no call out fees, a dedicated team of professional veterinarian partners treat a wide range of animals. Pricing is upfront, transparent and affordable to make it easy and convenient for you and your pet 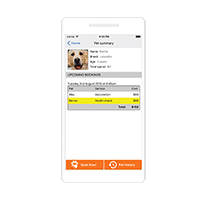 Your pet's medical records wherever you go

Pawssum's technology enables you to access your pet’s up-to-date medical records right at your fingertips via the Pawssum app. Our Telepet Service also lets you video chat with a registered vet so they can support you and your pet when you need it.

Some of Pawssum partner vets

Pawssum provides online access to local mobile vets who are registered, experienced and trusted professionals, from your local community.

Telepet - at-home video calls or chat with a vet

Your local vet is three steps away.

We believe in transparency when it comes to costs. Prior to your house call vet appointment, we will contact you to get more details to provide upfront estimated costing from your mobile veterinarian so you know of the price every step of the way.

Continuity of service is important to us! Through our technology of the app and online, you can access your pet’s medical records anytime, anywhere and easily book follow-ups. Our partner mobile vets can also follow up treatment in a partner vet clinic if required.

Pawssum: A new vet care service vs The traditional way

Don't just take our word for it

The Pawssum Company is easy to deal with and very parfessional.

Dr Stuart attend our dog Django. Dr Stuart could not have been helpful, compassionate and understanding. He made a very difficult & sad experience as comfortable as possible for us.
Dr Stuart should be proud of his work and is a true Professional.

Service was incredible. Dr was very kind and explained the process before he started. My cat Bonnie went peacefully in her home environment. Highly recommended using Pawssum.

I was very happy that you could organise Vet visit for my cat, although I had to wait until next day, it was worth it to avoid stress for my 17 years old cat. Visiting Vet was great, and phone operator was very understanding. And I think the fee was reasonable. Thank you very much

I’d been adopted by a cat for about a month or so but had no idea of history or vaccinations or even gender, so eventually I thought it best to have it all checked out. As a non-driver, Pawssum became an obvious choice. The price seemed fine and I was hugely impressed that I was able to get an appointment for noon on the same day (I arranged it very early in the AM and it was confirmed once working hours began).

Dr Bahaa was even a bit early which was good, and after some trepidation on the cat’s behalf, we managed to find out she was a she, and already microchipped, so he got in touch with Tiff the cat’s actual owner.

The end result – it was a nearby neighbour. We had a chat, and the neighbour is very happy for Tiff to keep visiting here, and now if Tiff doesn’t come home (to the neighbour’s house or mine) we know she’s probably at the other place instead! Which is less worry for all concerned. Also, the cat already has a vet so I now know I don’t need to be the one arranging that. So I’m getting all the cuddles and company without the need to worry about that other side of it. Win / win.

But it was Dr Bahaa and Pawssum that got it to that point, and I’m grateful for the efficiency of it all.

I could not have happier

I could not have happier with the service received during our time of need. I would recommend pawssum to anyone.

Thank you so much for

Thank you so much for helping Nala , what a wonderful service, Dr Julie is fantastic!!

Missy is a recent rescue who can’t handle the car yet so it was great being able to get someone here. Dr Justin was kind to her and her medical problem is already improving.

Pawssum, the vet and the crematorium representative were all sympathetic, gentle and understanding. They made a difficult time less stressful.

Had both my dog and cat vaccinated at home. Dr Justin is gentle and caring and makes my animals and I feel very comfortable. Thank you

Having Dr Julie over was so amazing. Not only did it reduce the amount of stress Dexie had to endure, but the level of care and advice given by Dr Julie was of high quality. You can really tell that she genuinely cares about her patients!

Thank you very much to

Thank you very much to Dr Beshoy for your extremely professional & gentle manner while dealing with my beautiful cat Misti. I was beside myself & I was in such a state & DR Beshoy helped to reassure me & explained everything to me about what was going to happen. He was very gentle with Misti & I was so pleased & he even wrapped her in her bunny rug & then into another cloth for me so as I wouldn’t be more distressed. The service was very good & kind & I appreciated the support that Dr Beshoy extended to me. I shall be recommending your business to all my friends & colleagues.
Thank you & kind regards Denise Walsh

I was very pleased with the way my beloved pet was treated…Dr Stephen was very
Compassionate in the way he put my pet to sleep..I have had another pet done years
ago and the experience was quite traumatic for both myself and my pet…so glad I made the right choice this time by contacting pawssum I highly recommend them.

Thank you so much for your wonderful service. You went above and beyond to help me and I am so very grateful. You all showed such empathy and Dr Kerri was fabulous and so caring. I can’t thank you enough and will tell everyone how wonderful you are

Dr Julie and her colleague were exceptional They were both extremely kind and considerate towards Smudge and myself (and husband too!) The service was very efficient and easy to use
Thank you everyone so very much

Everything about the process with Pawssum is designed to lighten the emotional load of saying goodbye to a beloved family member. Making the booking is easy, and the vet was very gentle and calm, with us and our dog. Highly recommend.

Busy weekend and holiday ahead? You're not alone.

December has arrived! Everyone knows it's Christma

Thank you Nick for sharing your recent experiance

Always a pleasure to hear the amazing feedback fro

Absolutely loving this part of our job! Thank you

Max looking super chilled after his vaccination to

Do you have a morning routine for your puppy? 🐾

We love giving back

Pawssum always remembers there are pets in need, so that's why we always do our part to give back. We give a portion of our profits from each booking to the charities below.

Your pet deserves a visit from a Pawssum mobile vet. Book now to claim your $20 off!

Pawssum Vets are open for business during the Coronavirus epidemic, Australia-wide 7 days a week until late.